I don’t remember the exact words Tim and I were yelling at each other, as we scrambled through farming terraces in a frantic dash to try to make our boat. But, I do know we weren’t being nice. We were in an all-out stress-fight. It was one of those fights where the problem actually had nothing to do with us, but we needed something at which to direct our frustration.

It was our first day on Lake Titicaca, which spans into both Bolivia and Peru and is the highest navigable lake in the world at a modest 3808 meters above sea level. We had arrived in the Bolivian lakefront town of Copacabana earlier that morning, and in typical-me fashion, we were cramming in a boat ride to Isla del Sol before continuing on our scheduled bus across the border into Peru that afternoon.

It was also our first leg traveling by Peru Hop, a hop-on-hop-off backpacker bus network similar to the one we had traveled New Zealand with. They had given us some options that morning of things to do during our “layover” in Copacabana, which included hiking a small mountain up to a viewpoint, or taking a short boat ride to Isla del Sol. Everything I had read suggested that Isla del Sol was an amazing place to visit, full of history and stunning views of the lake. For us, it was the obvious choice at the time.

Before our boat ride to Isla del Sol, we reviewed the map our guide on the Peru Hop bus had given us, outlining a short hike we would do that ends at the dock where we’d meet our boat to return to Copacabana. Easy! 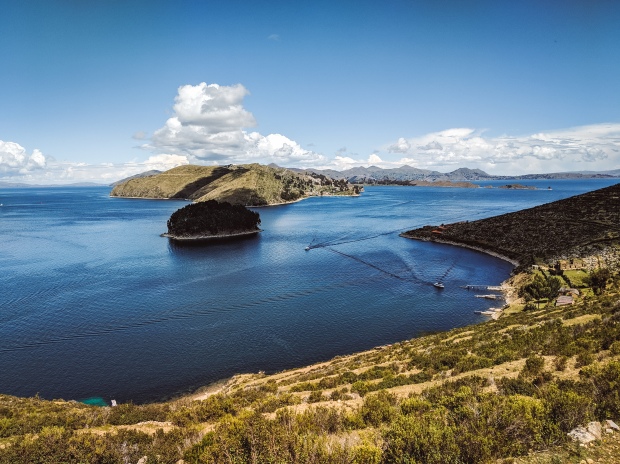 Turns out, not so much. I’m not sure how we managed to do this, but somewhere between exploring the ruins of the Temple of the Sun and arriving at the Inca Stairs (supposedly an hour-long walk apart from one another and where our return boat would be meeting us), we ended up…somewhere else entirely. We don’t know where and we never will.

Tim and I are the real dumbasses of this story

All we knew is that the trail we were on kept going up, and we needed to be decidedly down in order to get back to the water and on our boat. From the trail, we saw a small speck that looked like it might be a dock for a boat. We decided to place our bets on this dock being OUR dock for catching the boat back to the mainland, and then plotted our path.

Of course, our path was not a path at all. Instead, we had to scramble down terraced farmland, something I feel terrible about for many reasons. Aside from obviously disrespecting the farmers’ property and potentially damaging crops, I have a huge fear of falling on steep terrain. I tried to hustle as fast as I could without risking twisting an ankle, all while Tim yelled from ahead of me to hurry up and to try to move faster and to stop being so slow and oh my gosh we’re going to be stuck on this island overnight if we don’t make this boat.

Finally on the Inca Steps!

So yeah, it was stressful. And yes, Tim and I definitely stress-yelled at each other the whole way down. But after 15 minutes of serious scrambling, we arrived on a lower trail that led to the Inca Stairs and we knew we were on the right track!

Somehow we even had time for a few photos before having to get back on the boat, but not enough time to fully catch our breath or for the sweat to dry. Needless to say, these photos are not our best, but the smiles are genuine and full of the euphoria that follows avoiding a travel disaster!

Once safely on the boat, we returned to Copacabana, hopped on our bus, and began the fairly short drive to the country that hugs the other side of Lake Titicaca – Peru! 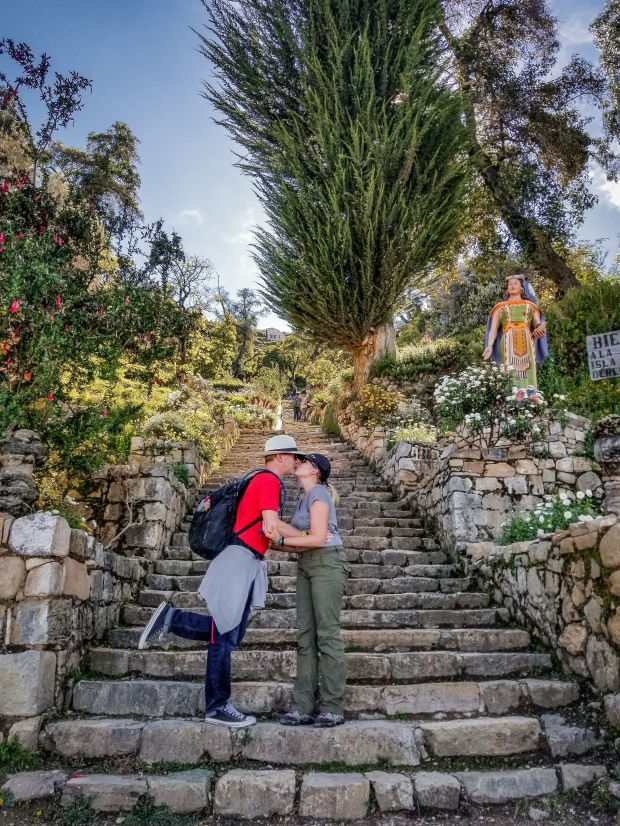 Once over the border, we rode another 2.5 hours to the lakeside town of Puno. We found the city itself rather lackluster. It felt kind of grimy and had a bit of a smell along the shore. We weren’t there for urban adventures, thankfully. Puno was merely our jumping-off point for exploring several islands on the Peruvian side of the lake!

We booked a two-day overnight trip through Find Local Trips to explore various islands. Even though the islands are all part of the same lake, the cultures and traditions on each are unique from one another, so we wanted to get a taste of as many as we could with the time we had. 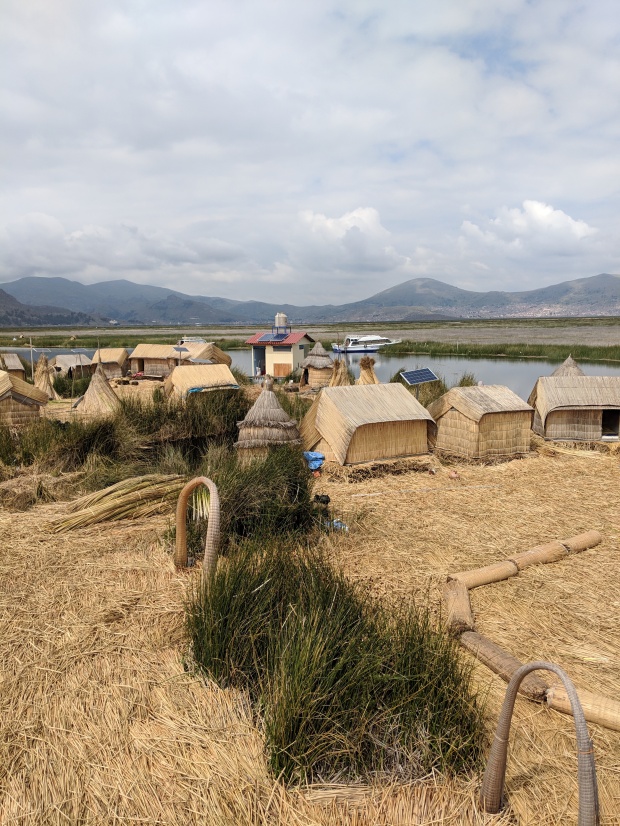 Village in the Uros floating islands

Our first stop was the Uros floating islands. These man-made islands are made of compact blocks of dirt. The blocks are tied together to make the island, and a rock anchors the island in place. The islanders put layer after layer of reeds on top, and voila! Though I’d heard of these islands in the past, I never knew why the Uros people built them or when. We learned that the Uros people have been living on the lake for hundreds of years, after Inca expansion pushed them off the mainland.

Walking through the village

The Uros people blended with the Aymara people over time and eventually adopted the Aymara language, which is what they speak today. They still maintain their islands and homes using the tortora reed that is abundant on the lake. Even their traditional boats are made out of reeds, which they shape and paint to look like puma heads at the front of the boat. Of course, nowadays they use motorboats and these traditional boats are mostly for goofy tourists like us. 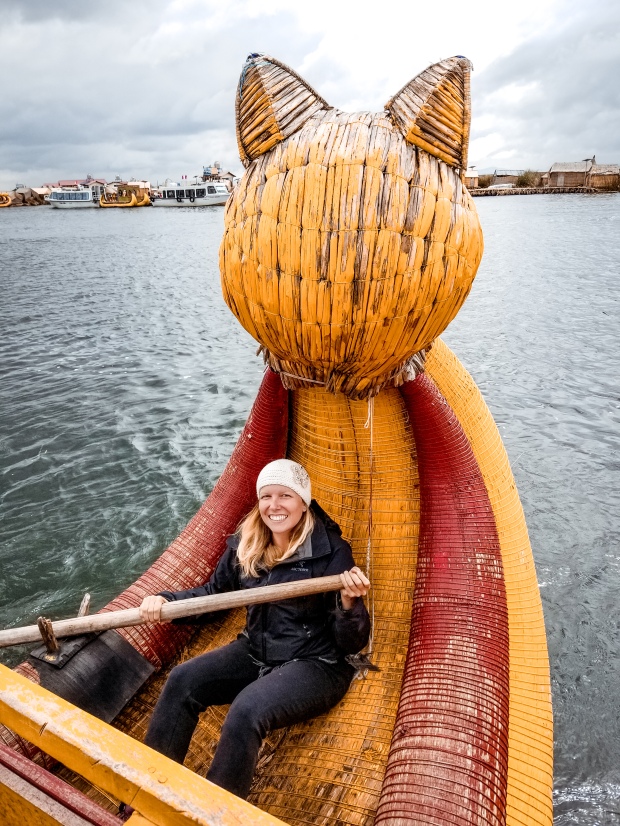 Rowing one of the reed boats!

After departing the Uros floating islands, we continued our boat journey on Lake Titicaca to Amantani Island, where we spent the night in a homestay. The locals are vegetarian (but will eat fish on special occasions) and there are no cars on the island. All of their electricity is solar powered! Being here was a great reminder of how simple and LOW WASTE life can be.

When we docked at the island, everyone on our boat was “assigned” to a homestay host. We followed our hostess, Obedia (unsure of the spelling of her name) to her home, which we were surprised to see was truly a proper guesthouse or bed and breakfast. After lunch and settling in, we spent the afternoon hiking to the simple but beautiful ruins of the Temple of Pachatata (Father Earth) that sit on top of a hill just outside the main town square. 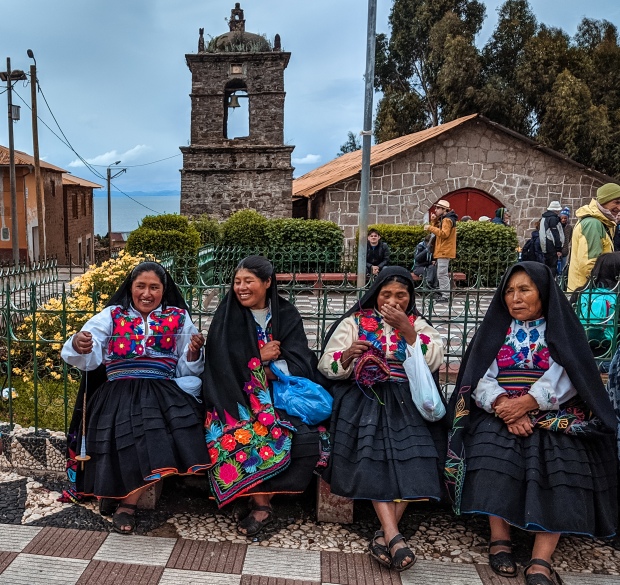 Women in the main square on the island. Our host is on the far left.

We returned in time for a local dinner (lots of cheese, potato, corn, bread, and soup!) and then Obedia encouraged us to dress in traditional clothing for an evening party. The party was a bit cheesy, and had that inauthentic “we’re just doing this because tourists like it” vibe to it. But, there was a solid 10 minutes of laughter and dancing among everyone there before energy starting to wane. Once Tim and I noticed that Obedia’s school-aged daughter was asleep in her lap, we decided it was probably a good time to head back to the house.

The next morning after breakfast, Obedia walked us back to the dock to get back on our boat and continue our journey. The next island we visited was Taquile Island. Taquile has been inhabited for thousands of years, and the people rarely marry outside of the island (though it’s more common now). The island is known for its unique textiles, and men and women wear different colors to indicate relationship and community statuses.

We arrived back in Puno that afternoon for one more night. We treated ourselves to dinner at a highly-recommended restaurant called Mojsa. The food was absolutely outstanding – even the llama we tried (yes, we ate llama…). It was a delicious way to cap off our time on Lake Titicaca and kick off our month-long exploration of Peru!