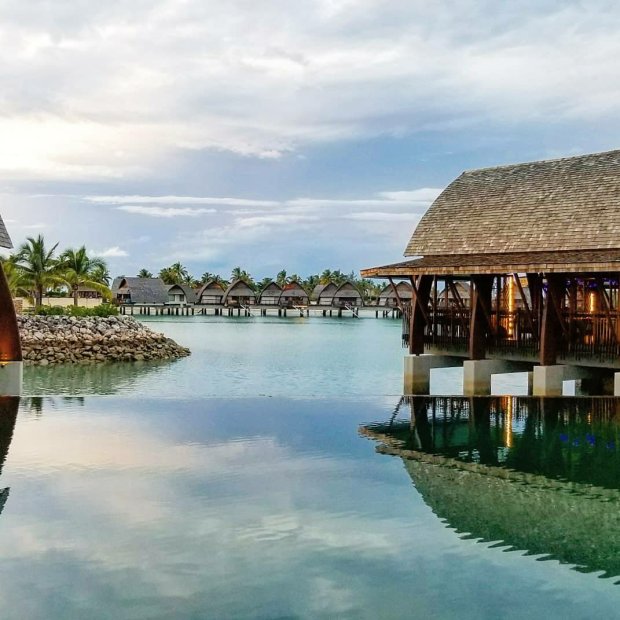 About a year ago when I heard that Marriott east opening a new resort near Nadi, Fiji, Tim and I decided we should include a stop there during our round-the-world honeymoon since we were going to be visiting New Zealand and Australia anyway. Fiji is basically in the same neighborhood.

Using my Marriott points earned from years of business travel, we booked 5 nights at the Marriott Fiji Resort Momi Bay. This means our stay would be basically free.

Traveling from Christchurch, New Zealand to Fiji was actually a pretty long itinerary. I always book the cheapest fares and sometimes that means booking weird flights. In this case, we flew from Christchurch to Brisbane, Australia and then to Nadi, which was nearly 8 hours of airtime. When we arrived to Nadi, we were ready to relax!

The first thing we noticed about Fiji is how warm and welcoming the people are. Airport staff were smiling and kind, and even gave everyone shell necklaces and a bottle of Fiji water upon arrival. A survey at the arrivals hall of the airport asked, “Were you greeted with a Fijian smile?”

Clearly this is a significant part of their culture!

From the airport it was about a 45 minute drive to to the Marriott. When we checked in, they told us that we were upgraded – to an OVERWATER VILLA! 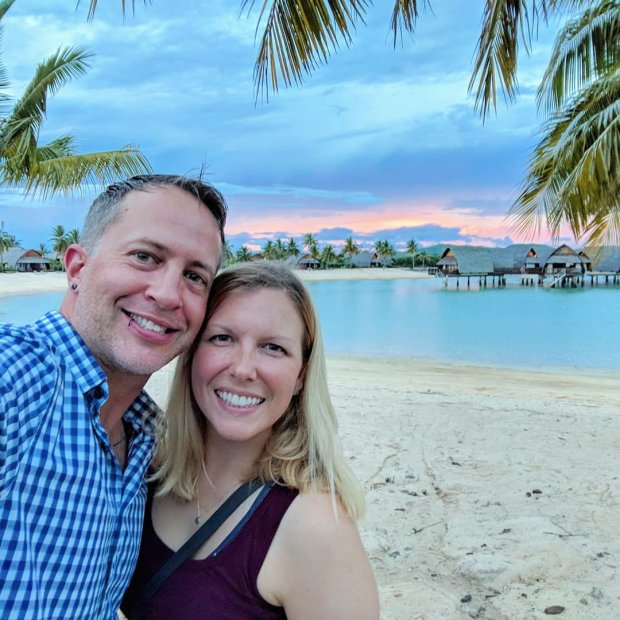 I almost cried from excitement and gratitude. Never in my life did I think I’d be staying in one of those iconic, luxurious and expensive bungalows. But here we were, and it was completely free!

The resort is very large and spread out, so staff are available to resort guests on golf carts. We rode to our bungalow on the water, which sat among dozens of others connected by a wooden boardwalk in the bay. 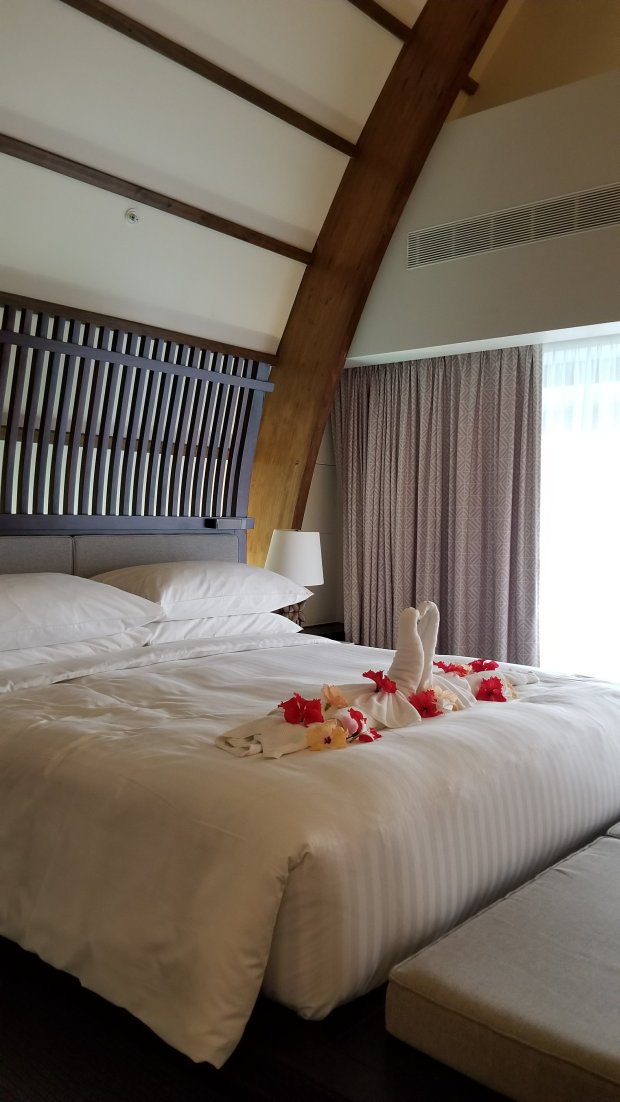 The room was very decadent. Panels on the sides of the room gave us a view into the blue water below, with the occasional fish swimming by. There was a large living room; a beautiful king bed; a bathroom the size of my bedroom at home with a large two-person bathtub and amazing rainstorm-esque shower head; and lastly, a huge deck with stairs down into the bay. It was completely dreamy.

After we checked in and frolicked around our room, we ventured out to explore the resort. We caught a stellar sunset, found the infinity pool, and dined on fresh fish at the seafood restaurant. Surprisingly, the prices were not as expensive as we expected for food. Given that your only choices are the restaurants on the resort, you’d think they could charge whatever they wanted. As an example, each of our meals cost about $40 USD, which is about what you’d expect to pay at a nice seafood restaurant for fresh fish.

When we got back to our room, we had another surprise – a bottle of champagne and some pastries. They were really spoiling us!! 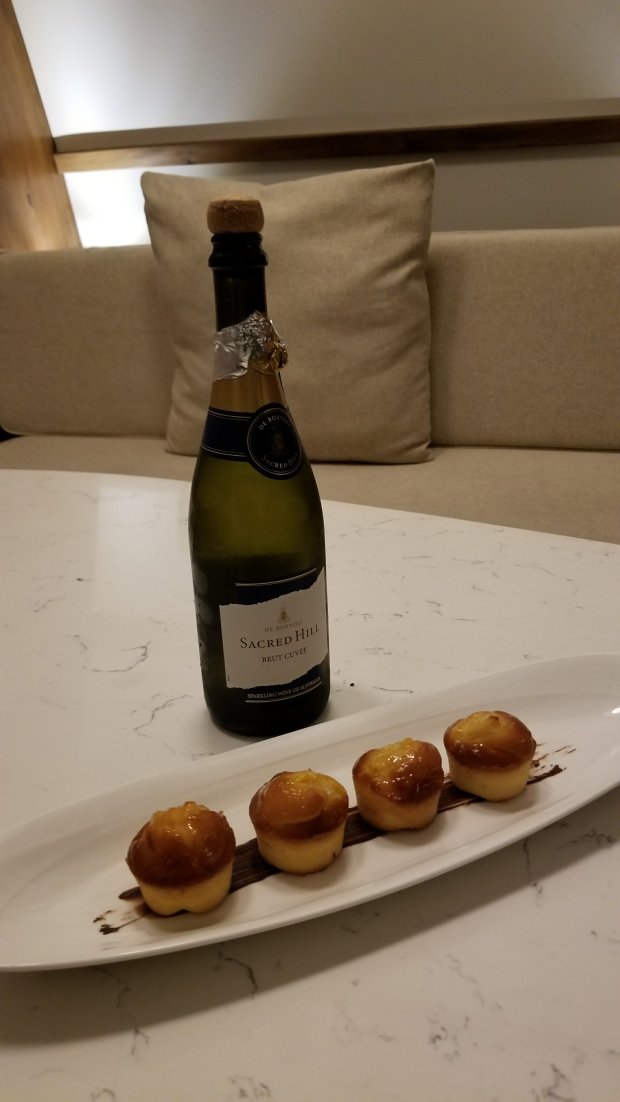 The next morning, we had breakfast at the buffet (also complimentary). They had a large selection of meat, sides, fruit, cereals and pastries. They even had Indian and Japanese-influenced items. Of note, when Fiji and India were both under colonial British rule, Indian indentured servents were sent to Fiji. Today there is still a strong Indian influence on the islands.

We spent the day, and the next several days, lounging by the infinity pool. Over the course of the week we each went to the spa for facials and massages, drank wine while watching Netflix from our giant bathtub, swam around the bay, watched flying fish from our porch at night, and basically relaxed every day. Surprisingly, we didn’t get bored even after 5 nights there. We agreed we could have easily stayed twice as long. 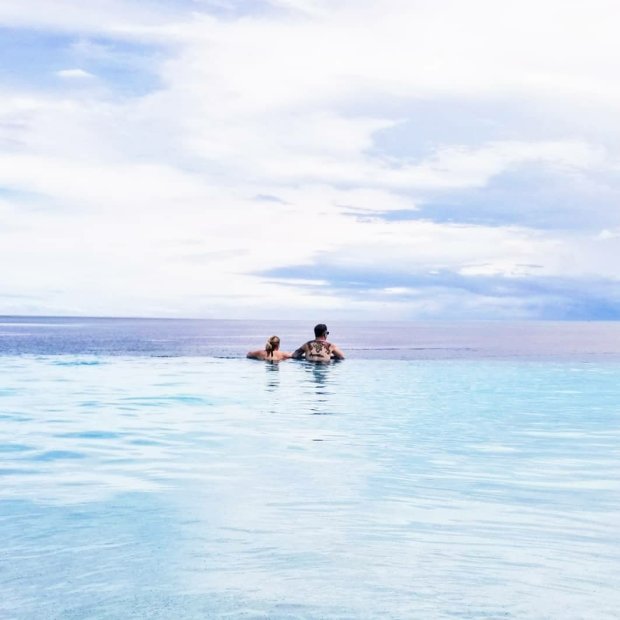 We also made friends around the resort – another American couple from North Carolina with whom we had dinner one night, and a woman from the Netherlands. They were each more traveled than Tim and I are, but even they agreed this was the nicest hotel they’d ever stayed at. It certainly was for us!

The last few days there, the cast and crew of the TBS comedy show Wrecked were also at the resort. Everyone was staying there while they filmed the next season. So at each meal we would see the main actors and actresses eating at tables near us. It was exciting (even though, admittedly, we’d never heard of the show prior to this), since we don’t normally have any exposure to those in the television industry.

Tim and I thought about booking a tour to visit a village or do something “cultural” but in the end decided that our hotel was an experience in and of itself. Plus, we were able to talk to the staff who all live in local villages and are bussed in every day for their shifts. Everyone we met was incredibly kind and friendly.

Nearly a month later, I still fantasize about that resort. I feel incredibly lucky that we got to stay there! It was a relaxing and welcome break between our New Zealand road trip and the Tasmanian road trip we were about to begin! 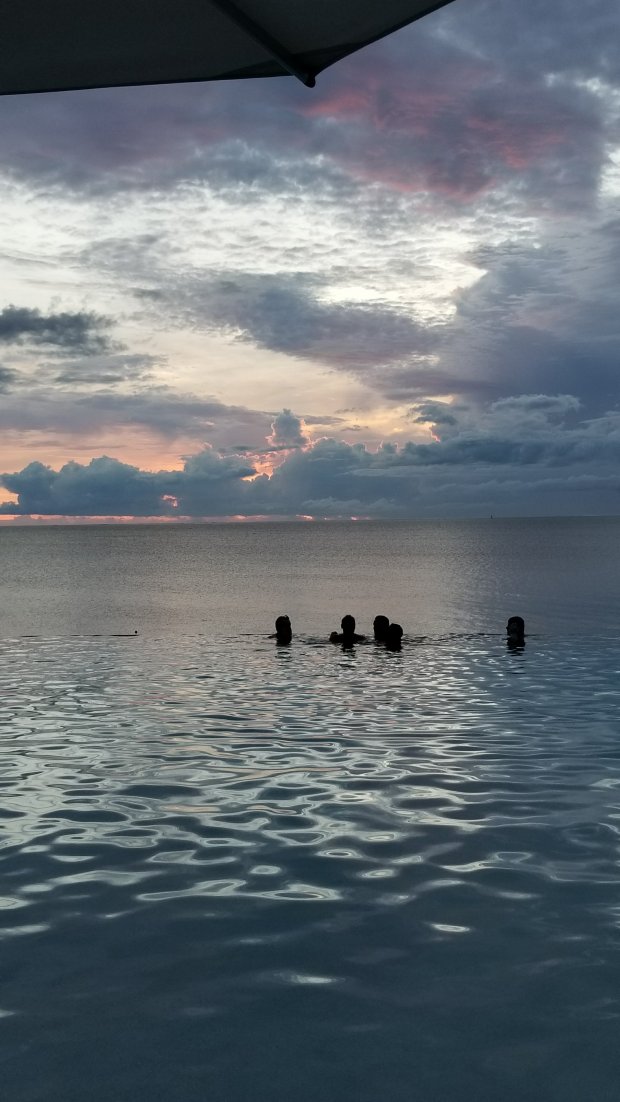 Sunset by the infinity pool

Where is the nicest hotel you’ve ever stayed? What did you love about it? Have you been to Fiji? If so, what island? Tell me more in the comments!