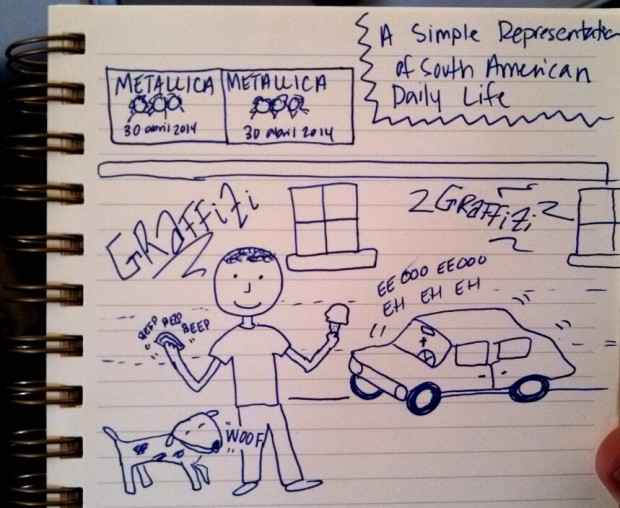 Tim and I noticed a few quirks about South American culture and so we decided to draw a picture summarizing our informal findings for each major segment or region we visit. As a disclaimer, we know these are generalizations and that every culture has nuances, and we certainly don’t mean for it to be taken negatively or offensively. These are just some things we found funny and interesting and want to remember about our cultural experience.

1. Ice cream- it seems like from Peru, to Chile, Uruguay and Argentina, people are constantly eating ice cream.

2. Car alarms- remember in the 1990s in the US when car alarms were super sensitive and would go off often and always sound the same? That’s what it is like in South America today. For example, one time a car drove by two parked cars, and both of the parked cars’ alarms started going off.

3. Awesome stray dogs- the stray dogs in South America are so smart, and they seem to function as part of their own little dog society. They even know when to cross the street and some even take the busses.

4. Cell phone volumes- whereas in the US it’s common practice to silence phones or keep them on vibrate, in South America people tend to have them on full volume, including the little “tick tick tick” noise when typing on them. It’s pretty annoying when people are playing games.

5. Graffiti- South American buildings are covered in graffiti. Some of it is beautiful art and some of it is simple vandelism, but all of it is very common.

6. Rock music- we saw a couple of examples of South America’s fandom for older rock bands. Metallica is apparently going on tour there and Aerosmith, Guns n Roses, and other rock bands are favorites with many locals we met.

7. Catholicism- South America is very Catholic, and it is quite common to see signs of this everywhere, including little shrines set up randomly on the side of roads or cross accessories in cars, windows, etc.